Why You Should Try Ashtanga Yoga 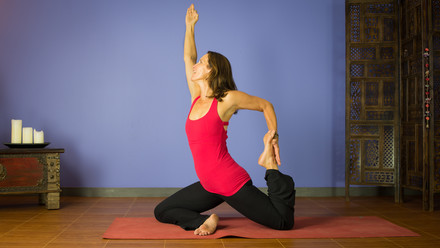 What is Ashtanga yoga?

Ashtanga is a form of yoga that has gained popularity throughout the western world. Ashtanga is the sweatier mother of vinyasa yoga, where practitioners perform a set series of poses that are always done in the same order. Ashtanga beginners start with the primary series of asanas (or poses), and after mastering them will move to the secondary and tertiary series of poses. During a class there is little talking, and no music.

Ashtanga classes are fast-paced flow classes, normally taught in a heated environment. The heat cultivated in the inner body is said to purify the muscles and inner organs, while expelling harmful toxins.

Like most forms a yoga, ashtanga helps to improve flexibility and bring focus to the mind. Ashtanga yoga also emphasizes physical strength and muscle training needed for the rigorous practice. Working through the series of asanas will help to build stamina, endurance, and total body strength. It’s an ideal way to strengthen and tone the body, while remaining lean. The repetition of poses provides discipline and helps to calm the mind. .


What to expect from an ashtanga yoga class

ADon’t expect to watch the instructor demonstrate the poses in an ashtanga class. Instead instructor (or their assistants), move throughout the room and assist or adjust students to help them get deeper into the pose. If you’re not one that likes to be touched, an ashtanga class might not be for you. All Ashtanga classes are taught in sanskrit, the language of yoga, and some don’t ever say an english word. This might seem overwhelming, but after a few classes you’ll be able to pick up which poses they’re talking about. Ashtanga is a great style for all levels, so in a class you’ll encounter experts and novices practicing next to each other. Don’t let this intimidate you, after a couple of classes you’ll have gotten the hang of it and know what to expect.

Ashtanga yoga can be done anywhere

Ashtanga yoga is repetitive and involves a set of sequenced poses that are followed in the same order. The primary series, which most yogi’s practice, involves five sun salutation As, five sun salutation Bs, the standing sequence, primary series seated postures, and the closing sequence. Because each ashtanga class follows the same sequence of movements in every class, you can anticipate the movements wherever in the world you decide to practice. This repition is not for everyone, some practicioners find it boring. However, knowing the ordering of the sequence makes ashtanga a great way to practice Abbreviated Primary Series